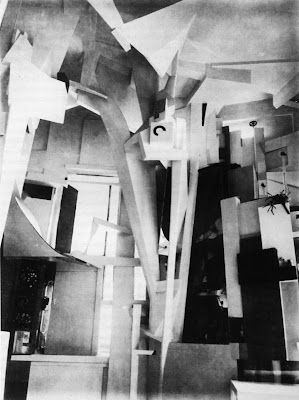 Kurt Schwitters (1887-1948) was a German painter, installation artist and composer.
One of his most important art works was the Merzbau, an uncompleted and ever-growing project, which involved the consistent alteration of a series of interior spaces. The starting point of the work was Schwitters' studio in his house at No. 5 Waldhausenstrasse in Hannover. Work started in about 1923, the first room was finished in 1933 and Schwitters subsequently extended the Merzbau to other areas of the house until he fled to Norway in 1937. By then it had spread to two rooms of his parents' apartment on ground floor, the adjoining balcony, the space below the balcony, one or two rooms of the attic and possibly part of the cellar. Among the Souvenirs of friends and other things of sentimental value were stored in niches and later walled in. This idiosyncratic, abstract, created environment was completed by grottoes for Hans Arp and Theo van Doesburg, two caves for Hannah Höch, a cave for Lissitzky and one for Mies van der Rohe, as well as grottoes dedicated to abstract ideas, e.g. a Goethe Grotto or a Murderers' Cave. In 1943 it was destroyed in a bombing raid.
Schwitters later created a similar environment in the garden of his house near Oslo. This was almost complete when Schwitters left Norway for England in 1940. It burnt down in 1951 and no photos survive. The last Merzbau, in Cumbria, England, remained incomplete on Schwitters' death in 1948. A further environment that also served as living space can still be seen on the island of Hjertoya in Norway.
No comments:

I have completed the construction of my burrow and it seems to be successful. All that can be seen from outside is a big hole; that, however, really leads nowhere; if you take a few steps you strike against natural firm rock. I can make no boast of having contrived this ruse intentionally; it is simply the remains of one of my many abortive building attempts, but finally it seemed to me advisable to leave this one hole without filling it in. True, some ruses are so subtle that they defeat themselves, I know that better than any one, and it is certainly a risk to draw attention by this hole to the fact
that there may be something in the vicinity worth enquiring into. But you do not know me if you think I am afraid, or that I built my burrow simply out of fear. At a distance of some thousand paces from this hole lies, covered by a movable layer of moss, the real entrance to the burrow; it is secured as safely as anything in this world can be secured…

Continuing along the lines of obsessive environments, I hereby enclose the first few words of The Burrow, original title Der Bau (the Construction), short story by Franz Kafka, included in The Complete Stories. The main character of this story devotes his life to the creation of a tunnel of constantly increasing complexity. Throughout the whole text he has the obsessive idea that this complex work of architecture (the burrow) will be attacked by potential enemies at any time. Curiously enough, the den, created with a constant paranoid striving for perfection, does not result in its author's peace and calm. To the contrary, it rather causes him increasing anxiety. 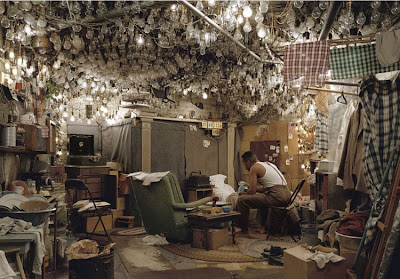 Jeff Wall is a photographer from Vancouver, BC. Each of his images is the result of immensely elaborate creative explorations. He may spend from weeks to years on completing a single finished image. He stages his scenes, sometimes reproducing or interpreting paintings or specific events.
For more information on the artist, please click here, here , here and here.

Ralph Ellison's 1952 novel Invisible Man centres on a black man who, during a street riot, falls into a forgotten room in the cellar of a large apartment building in New York and decides to stay there, living hidden away. The novel begins with a description of the protagonist's subterranean home, emphasising the ceiling covered with 1,369 illegally connected light bulbs. ISBN 978-0-679-60139-5
No comments: 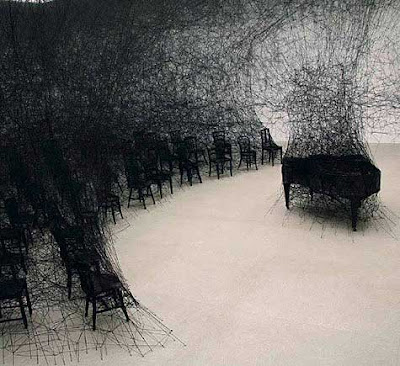 For more information on the artist, please click here.
No comments: